I hate to burst the bubbles of many Animal Studies, Animal Sciences and Zoo-ology students but working in dog rescue is not cuddling cute puppies, bottle feeding, playing with dogs and going on lovely walks…oh no. Obviously, there is a fair amount of kennel cleaning, picking up s**t, mopping up wee, being covered in fur, bathing, flea combing, disinfecting and wiping up vomit just to name a few, all of which you can be trained for to some extent.

However, what you cannot be genuinely trained for, is the constant roller-coaster ride your emotions will be swept along as you begin to realise the imbalance of occasional positive occurrences dotted amongst the relentless waves of heart wrenching and soul destroying situations you will be thrown into the middle of. So let us delve into the darker, uglier and less spoken about world of rescue.

You might well have all seen the horrific images splayed across billboards and television screens depicting dogs and cats who have been discovered by organisations such as the RSPCA and Dog’s Trust, campaigning for donations and animal cruelty legislation changes. But what you do not see, is the worker assigned to that emaciated and sick dog who works tirelessly medicating, nursing, rehabilitating, building trust, a bond with. That person does not stop at the end of their working day carefree; they go home and worry, care and make plans on how to make it better tomorrow. They love. You do not see the day that dog takes a turn for the worse physically or crosses it’s third strike behaviourally,  and that worker must sign the papers and carry the dog to take it’s final endless sleep on the veterinary surgeons cold metal table. How they will hold that dogs paw, apologising for failing them and promising them they were loved. They could wait outside, but they refuse to allow that dog to die alone, not knowing it was loved.

This week, I lost 2 very young puppies at just 10 weeks old to the destructive Parvovirus after a week long battle. They had been 4 healthy 7 week old puppies with a minor flea allergy causing a scabby skin condition that was easily remedied. Playful, active and growing well. Then after 2 had been adopted i was informed they had both been admitted into the intensive care units at their respective vets. 2 days later a third puppy still in the rescue care became sick and was placed on medications. I nursed her day and night, cleaning her kennel at every slightest wee, poo or sick. I cooked her every meal under the sun and tried to hand tempt her which worked at first, and syringed her water every 2 hours. I cuddled her and let her sleep next to me at all times. I had her admitted after a severe blood loss and she picked up for 36 hours, so much to the point i was hopeful to bring her home, in this time one of her adopted brothers, the beautiful Paddy, had passed away. The next morning the vet told me in a very sombre tone that in fact Ciara had become half the pup she had been overnight and was wasting away in front of her very eyes and was in extreme pain. We had to put her to sleep immediately. I could not be with her and hold her paw. She did not know how loved she truly was. 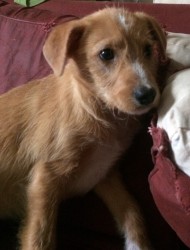 Left with the devastation of overwhelming veterinary bills, an upset and angry out-of-pocket- adopter, the rescue’s reputation at risk and a shadowing feeling of frustration that i had done everything by the book in terms of isolation, observation and reservation until 2 weeks had fully passed and our vets were happy with them, yet this had still happened… Whether it is the loss of loved rescue dog, a stolen charity pot, verbal abuse from those to whom you are trying to aid, social media trolling, a serious internal staffing issue or another day where you have to turn away dogs in need due to a lack of space… Each day will bring about questions such as;

“Why am i doing this?”
“Am i even making a difference?”
“Why did this happen?”
“The more i try to help the more seems to go wrong, is it me?”

This time i will answer for you; keep going, four paws at a time. Each dog adopted, saved, rehabilitated and medically treated is a win for the animal world. Even the most experienced and long standing rescue managers, founders and workers still question themselves, still feel drained of all emotion and faith. But it is those who wake everyday and trudge on through the darkest and ugliest side of animal who make the greatest impact, they will comfort others and continue on to save another life.

It is this simple fact that i bare honestly to you: every day in the world of animal rescue we are faced with the blunt, insatiable truth that life is not fair and justice does not prevail in the majority of cases. No matter how accurate, educated, experienced, cautious or reputable you are; there will be a daily shit storm that will leave behind destruction that you will have to rebuild faith, finances, emotional resilience and credibility constantly. Welcome to animal rescue, we need you, but we warn you; you have commenced in an uphill battle.